I used to think equation for weight loss is simple: eat less, weigh less. Now I know: it is really not that easy. Even though Mother Nature programmed our bodies so that we could survive without food for an extended period of time (in case hunting wasn't successful), we are not designed to starve ourselves. Nowadays it is too easy to go to the supermarket and buy the food we want, and our minds and bodies are used to being fed regularly. So when we don't eat, our body switches into starvation mode - which will lead to even greater fat production, and overeating in the long run.

I usually exercise 1 hour or 1.5 hours after a meal, so that I have enough energy but don't feel sick. This weekend, I went to the gym with a friend, and because she looooves to sleep in on a Sunday, she only had a small portion of food for breakfast. During exercise, you could hear her tummy rumbling, and she realized that her performance was going down due to a lack of energy. After the gym, she only ate a small amount of food again, because we were planning to go out for dinner that night. And that is when the issue arises. Because her body has been craving food all day, and because she ignored the hunger feelings until the last minute, she hopelessly overate at dinner. I couldn't even count the minutes until her Chicken Tikka Masala, Mango Cheesecake and two coffees were gone. At the end of the night, when we were home, she couldn't move because her stomach was so full, and she felt like she was going to be sick. Later she slipped into a self-induced food coma.

I have had these issues countless times. I wouldn't eat enough, either because I was planning on a big meal later on, or because I thought starving myself would make me skinny. However, these kind of plans are guaranteed to backfire. If the hunger feelings go away after a while, it is only so to come back twice as strong an hour later. It gets harder and harder to control yourself, and in the end you eat more than you should have, and are often left feeling sick and guilty.

You can avoid the problem of overeating by having regular meals and snacks, and listening to your body, rather than your head. If you are hungry in between meals, have a little snack. After a meal, wait 20 minutes and let your food sink in until you decide if you need more food or not. If you don't know how you should plan your meals, and what you should be eating to meet your goals ,Register with ProFitnessPlans.com Free! and we will create a nutrition plan suited perfectly for your needs.

Here is a list of some of my favorite healthy snacks:

However, my ABSOLUTE favorite is what I call 'Fake Sushi'. I have to admit - it is nothing like sushi - but if you look at how it is made, the name makes sense.
Fake Sushi
What you need:

What you do:
DONE! 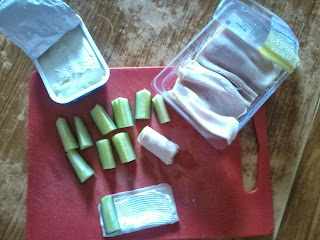 How easy is that? These Fake Sushi pieces are super delicious (especially if you are craving something salty), and if you use cucumber as your veggie, they are nice and crunchy, too.
So please stop starving yourself, you will only achieve the exact opposite of your goals, and you will feel grumpy and miserable doing so.

SNACKS FOR THE WIN!